Review: A World Without Princes (The School for Good and Evil #2) 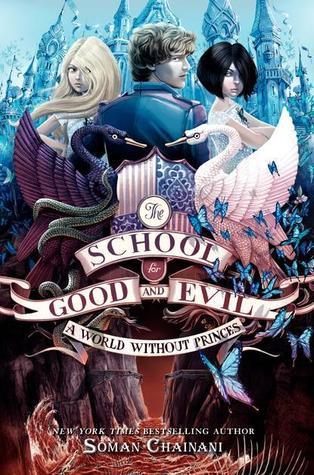 Title: A World Without Princes (The School for Good and Evil #2)

Synopsis: Agatha and Sophie are finally back home from The School for Good and Evil after being pitted against each other. Now they can go back to being best friends, which they want to be their happily ever after. The only problem is, Agatha makes a wish that she had chosen her happily ever after to be with Prince Tedros. This causes the School to re-open, only now it’s girls against boys, and the stakes are much more deadly. Will Sophie and Agatha be able to remain friends? Will Agatha choose Sophie or Tedros? Nothing is as simple as it seems in this second installment of The School for Good and Evil series.

So… a lot happened here, and I’m honestly not sure how to go about reviewing A World Without Princes, but here we are, so I guess I’ll give it a go.

There was just so much going on in this book that it felt like as soon as it started to find footing in one thing, it jumped right to another, which made things feel incomplete and at times, a bit rushed.

The concept of it all was pretty fascinating, and it showed the dangers of taking ideas (one gender is superior to another, for example) to extremes, and how dangerous it is to allow one person to have a great deal of control over information, how honest it is, and how easily it can be accessed.

Similarly to the previous book in the series, A World Without Princes focuses a great deal on themes of friendship, love, and betrayal, and those are done quite well. Gender is another theme that is brought up, yet it’s execution is rather sloppy, in my opinion. It was like some points were being made, but then they were dropped completely or were dismissed as foolish, which makes me a bit anxious, especially for readers who might have questions regarding their own identity. I was also a bit disappointed to see that feminism meant man-hating in this book. It was cool to see the girls living for themselves, but not cool to see hate towards men encouraged as being feministic.

While I found the book to be inconsistent at times, I have to say that it does the dark fairy tale thing quite well. Agatha, Sophie, and everyone else have such clear voices and play unique roles in the story. In this book, I really began to enjoy and appreciate the witches (Dot, Hester, and Anadil). They were funny, smart, and cruel to be kind. I really hope to see more of them as the series progresses.

All in all, A World Without Princes avoided the second book slump, but was more of a sloppy second book with poorly defined themes regarding gender, identity, and feminism that could be harmful to young readers.

But I do think all the characters learned something by the end. It was just a messy way of getting there.

Hopefully the next book is written a bit more carefully.

2 thoughts on “Review: A World Without Princes (The School for Good and Evil #2)”