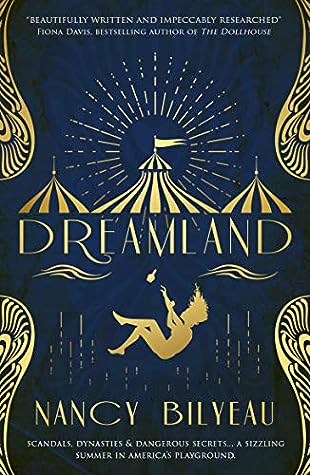 Synopsis (From Goodreads): The year is 1911 when twenty-year-old heiress Peggy Batternberg is invited to spend the summer in America’s Playground.

The invitation to Coney Island is unwelcome. Despite hailing from one of America’s richest families, Peggy would much rather spend the summer working at the Moonrise Bookstore than keeping up appearances with New York City socialites and her snobbish, controlling family.

But soon it transpires that the hedonism of Coney Island affords Peggy the freedom she has been yearning for, and it’s not long before she finds herself in love with a troubled pier-side artist of humble means, whom the Batternberg patriarchs would surely disapprove of.

Disapprove they may, but hidden behind their pomposity lurks a web of deceit, betrayal, and deadly secrets. And as bodies begin to mount up amidst the sweltering clamor of Coney Island, it seems the powerful Batternbergs can get away with anything… even murder.

Extravagant, intoxicating, and thumping with suspense, bestselling Nancy Bilyeau’s magnificent Dreamland is a story of corruption, class, and dangerous obsession

*I received an e-arc from Netgalley.

Dreamland is an interesting historical novel, vaguely reminiscent of The Great Gatsby with its thoughtful, yet pointed commentary on life in the early 20th century, especially the lives of the wealthy.
Peggy is a naive young woman through most of the story. She has very little understanding of how the real world functions, as she was born into an elite American family that owns several coal mines. As the story progresses, she begins to (somewhat) understand the lives of those beyond her odd, and at times cruel, family.
In the short span of a summer near Coney Island, she falls in love with a Serbian immigrant, gets tangled up in a murder case, and faces her past demons.
This book was a reminder that the United States has never been kind to immigrants. It’s incredibly frustrating to see how little has changed in 100+ years.
The insta-love and lack of plot toward the middle of the book is what brings it down to a 3.5 star read, rather than 4 stars. It really just felt like the entire middle was to make the length of the story longer. However, the ending really picks up. I was left feeling satisfied and mildly heartbroken.
Finally, I don’t think Dreamland should compare itself to Night Circus. I didn’t feel a strong sense of magical realism, and the comparison is a bit strong. Dreamland stands out in its own right as a commentary on early 20th century life and the darkness that comes with wealth in America.

Have you read Dreamland? What did you think?